Tuesday December 13th is the day many people have been waiting for ever since Thursday November 10th. What do those two days have in common? They each mark the monthly release of the Consumer Price Index, the official inflation data responsible for some of 2022’s wildest trading days.

Wild trading days aren’t just for traders.  They have a big impact on mortgage rates, not to mention bigger picture impacts.  For instance, if a wild trading day were to ensue from a higher reading on inflation, it would imply more restrictive policies from the Federal Reserve.  That’s something that can shape entire economic cycles, potentially hastening the recession that some market-watchers expect in 2023.

In the case of December 13th, it makes a lot of sense to worry about the implications for Fed policy.  The Fed releases its next statement the very next day!  It’s a near certainty that the Fed will hike rates by 0.50%, a 0.25% decrease from the last hike in early November.  Markets won’t be reacting to that as much as the info the Fed publishes alongside the rate hike.

Of specific concern is the proverbial “dot plot.”  This is a reference to the format of the Fed’s forward-looking rate forecasts, published in dot plot format showing each Fed member’s thoughts.  The “dots,” as they’re also called, frequently have the biggest impact on financial markets on the days when they come out (only 4 of the 8 Fed meetings per year).

In addition to the dots, the press conference with Fed Chair Powell will provide a venue for the Fed to share the brunt if its reaction to Tuesday’s inflation data.  Reason being: we can’t be sure how many of the Fed members will update their rate outlook for data that comes out on the same day that the Fed begins its meeting.  If markets are wondering how well the dots reflect Tuesday’s CPI data, Powell may be able to clear it up.

As for this past week’s market movement, traders looked for opportunities to react to the inflation data of lesser importance.  This was first evident when quarterly labor costs came in much lower than expected on Wednesday.  Then on Friday, higher wholesale inflation combined with stronger consumer sentiment to push rates back in the other direction.  This can be seen in the chart of 10yr Treasury yields below.  The 10yr is the most popular benchmark for longer rates such as mortgages. 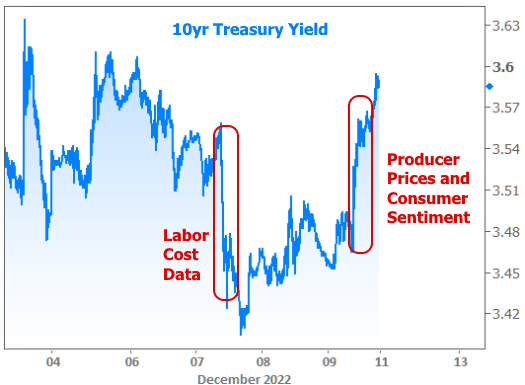 While this may look volatile, it wasn’t too dramatic in the bigger picture–a fact that can be easily seen when viewing a chart of average mortgage rates.  After falling last Thursday after Powell commented on the potentially smaller rate hike ahead, rates have been very flat against the backdrop of the last CPI report. 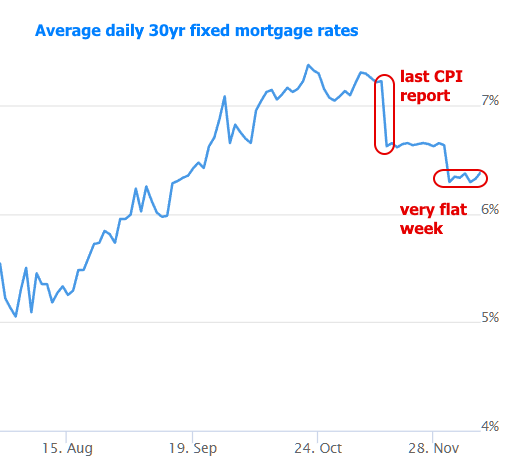 Rates can be flat because they’re waiting for more info, but also when there are mixed signals in the data.  Friday offered a good example of mixed signals on inflation specifically.  Here’s the bounce in producer prices (the “wholesale inflation” mentioned above).  It suggests higher-than-expected inflation next week. 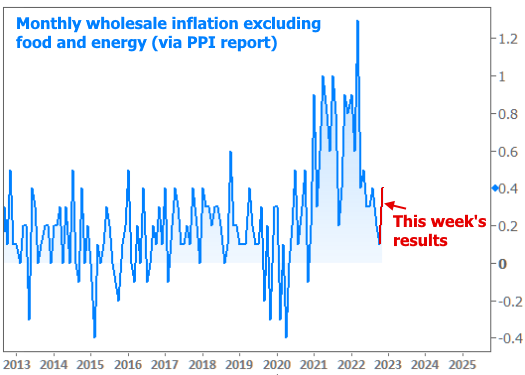 But Consumer Sentiment data suggested lower inflation next week.  The survey asks consumers for their price outlook over the next year.  Friday’s results showed a big drop from the previous survey to the lowest levels in 2022.  A survey of consumer’s thoughts on inflation might seem trivial compared to big ticket economic reports, but this particular data point often tends to foreshadow big picture shifts in inflation momentum. The following chart shows the survey response in blue overlaid with the Core CPI number (THE inflation metric that has the market on the edge of its seat next week). 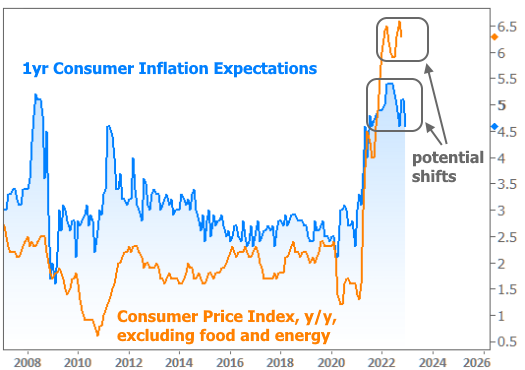 We can’t know whether CPI will come out higher or lower than expected.  Forecasters have already honed in on the best guess and markets have already positioned for it.  All we can know is that the farther the number falls from those forecasts, the bigger the potential market movement, for better or worse.  That means next Tuesday could see 30yr fixed mortgage rates screaming back up toward 7% or falling farther toward 6%.  A bit of the reaction may be reserved for the Fed on Wednesday, but between those two days, we have one of our biggest instances of potential volatility in a long time.